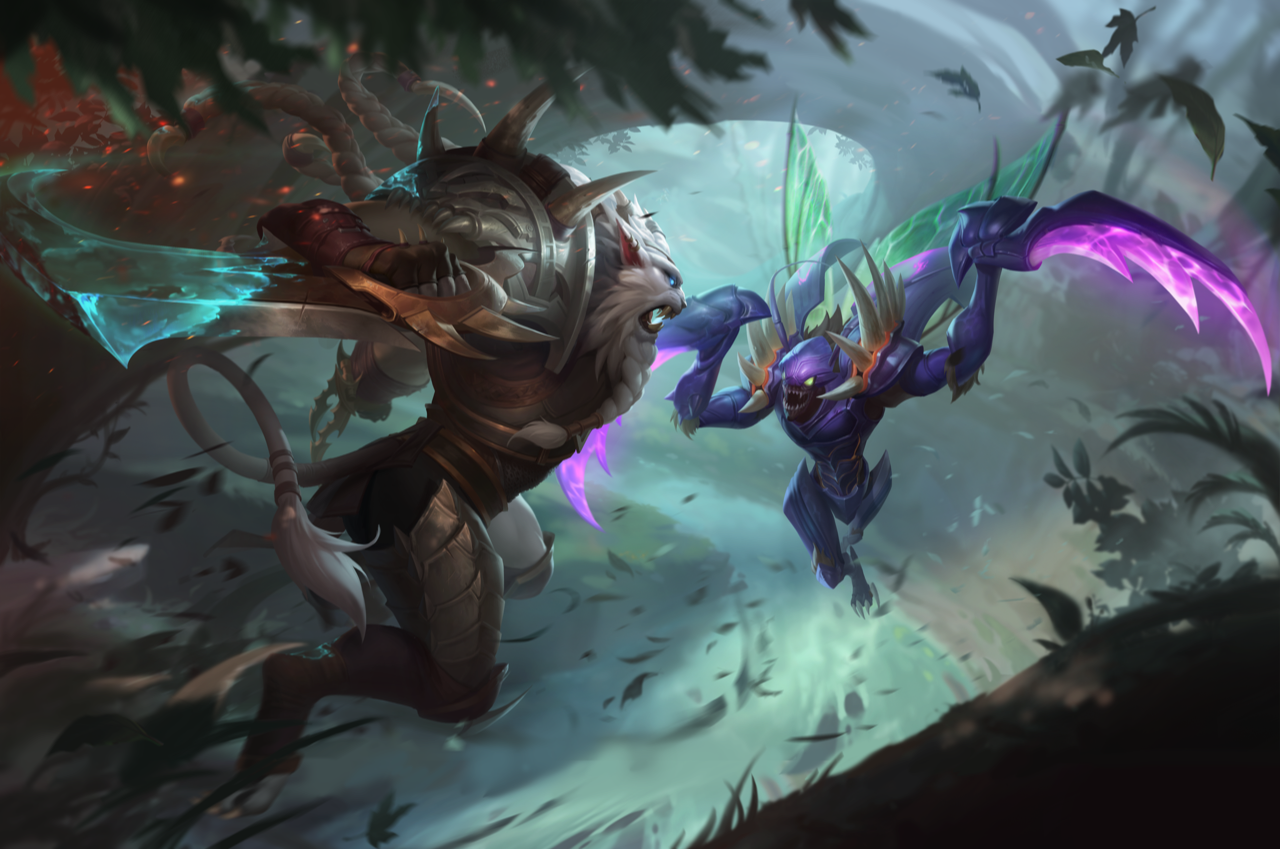 Ever shrouded by the fog of war, the jungles of League of Legends: Wild Rift can prove deadly to even the bravest of champions. Yet two natural-born hunters now claim this savage battleground as their domain, each intent on making a trophy of the other

While most events simply end, this vicious duel merits adding a few extra days for the last hunter standing to bask in the glory of victory. Just remember to pick up your team rewards before the event wraps up on May 25th, or your prize will escape into the darkness!

The Deadliest of Games

Born a runt in a clan of vastayan hunters, Rengar overcame his diminutive stature through incredible hardship to become chieftain, only to discard the title in pursuit of the hunt.

Once a fragile denizen of the Void, Kha’Zix consumed all in its path, assimilating the power of its quarry to evolve into a ruthless killing machine.

Now the two are facing off in an epic rivalry like no other, and only you can decide who’s top of the food chain!

At the start of the event, you’ll be prompted to pick a hunter to back—Rengar or Kha’Zix. You’ll flex your affiliation at the start of each match with a special team tag, enabling you to hunt with pride! Many of the rewards you stand to win will depend upon your affiliation, including which of the two champions you can unlock. Check out our player support article for more details.

We’re also introducing a brand new mechanic in honor of age-old rivalries: Nemesis Duel! This feature is a permanent part of the game that will continue even once the event ends. You can read this support article to see what happens when Rengar and Kha’Zix are pitted against one-another, gato a insecto.

We’ll be keeping track of a few key stats for both teams during the event to determine which side wins.

Week 1 is all about showing up for the hunt. We’ll be tracking the average number of games played for supporters of each hunter and updating the results daily.

Week 2 cranks up the intensity by adding the average number of takedowns scored by each team’s members. If you want the grand prize, you’re gonna have to earn it.

Also note that these scores are kept on a per-region basis, so there might be different winners across the globe!

The team that claims victory will earn an additional upgraded event icon, while the second-place team will unlock a Boost Bundle with one of each kind of boost. The winning team will also get to flaunt their champion’s spawn tag for one week after the event has ended. Let the world know that you’re a rep of Runeterra’s deadliest predator!

Also check out the trailer at https://www.youtube.com/watch?v=hNtEISWPIXk

As League enters its second decade, Riot continues to evolve the game while delivering new experiences to players with Teamfight Tactics,Legends of Runeterra, VALORANT, League of Legends: Wild Rift, and multiple work-in-progress titles, while exploring the world of Runeterra through multimedia projects across music, comic books, TV, and more.