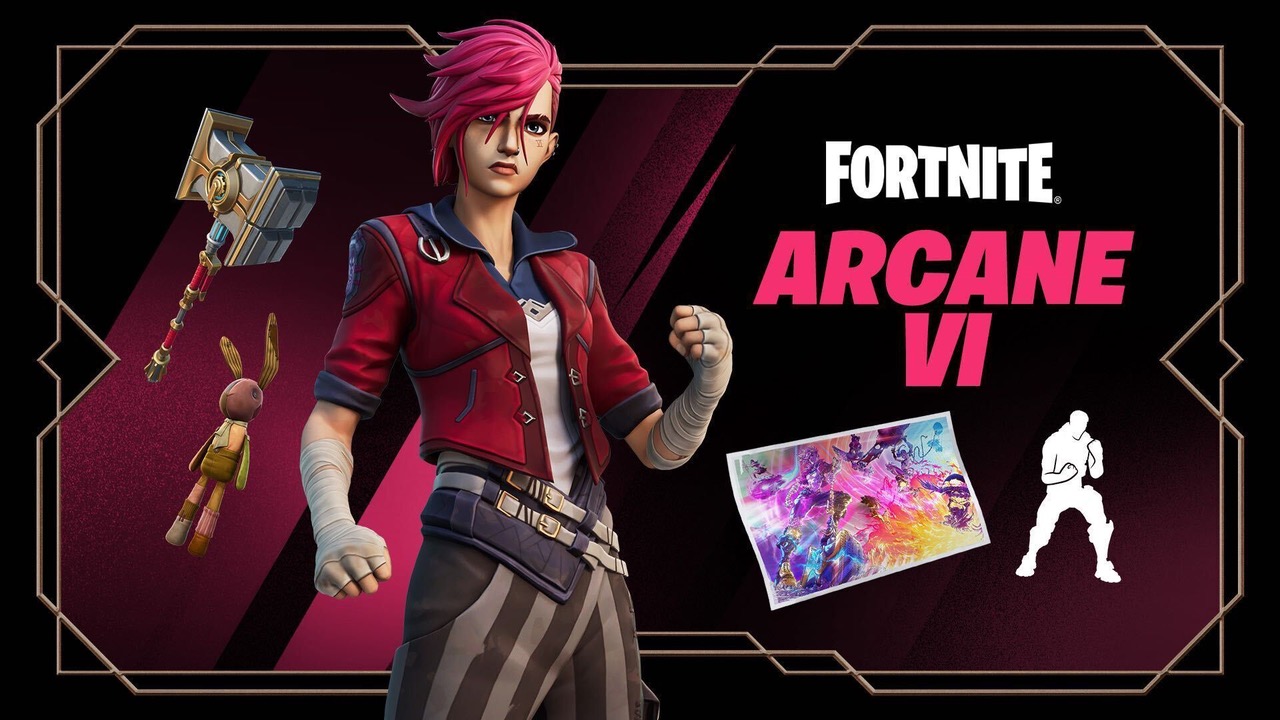 London, UK – January 22, 2022 – After League of Legends’ Jinx made her explosive debut in Fortnite, her sister Vi is breaking into the scene to join her. Based on Riot Games’ acclaimed animated series Arcane, which follows Jinx and Vi, Arcane Vi will be in the Item Shop starting January 23, 2022, at 01:00 CET Punch up your look with Vi-themed accessories as well.

Make an Impact with Arcane Vi and More

The Arcane Vi Outfit will be in the Item Shop alongside more new items of the Arcane: League of Legends Set. Put on the bunny Memories of Zaun Back Bling (sold with the Outfit) as a memento of how far Vi has come, equip Vi’s weapon of choice while her gauntlets are being repaired: the Piltover Warden Hammer Pickaxe, and show off why Vi’s called the Piltover enforcer with the Punching Practice Emote.

Missed out on Arcane Jinx? She’ll also be in the Shop starting January 23 at 01:00 CET

Players will have the option to purchase the Outfit (+ Back Bling), Pickaxe, and Emote in the Arcane Vi Bundle, which additionally includes the Piltover’s Finest Loading Screen

Explosive Re-Entry: Arcane Jinx Back in the Shop

Arcane Jinx and Jinx-themed accessories will be returning to the Shop at the same time Acane Vi debuts in the Shop. In addition to the Arcane Jinx Outfit, have some fun with the Jinx’s Dream Monkey Back Bling, pick up the Pow Pow Crusher Pickaxe, and pretend Piltover’s your playground with the Playground (Instrumental) Lobby Track (from the Arcane Original Soundtrack).

With the Arcane Jinx Bundle, get all of these Jinx items plus the Jinxed Spray, Wreaking Havoc Loading Screen, and Katchoo! Loading Screen!

Want more League of Legends? This free title is available to grab from the Epic Games Store!

Riot Games was founded in 2006 to develop, publish, and support the most player-focused games in the world. In 2009, Riot released its debut title, League of Legends, to worldwide acclaim. League has gone on to be the most-played PC game in the world and a key driver of the explosive growth of esports. As League enters its second decade, Riot continues to evolve the game while delivering new experiences to players with Teamfight Tactics, Legends of Runeterra, VALORANT, League of Legends: Wild Rift, and multiple work-in-progress titles. Riot is also expanding the world of Runeterra through multimedia projects across music, comic books, board games, and the upcoming animated series Arcane. Founded by Brandon Beck and Marc Merrill, and led by CEO Nicolo Laurent, Riot is headquartered in Los Angeles, California, and has 3,000+ Rioters in 20+ offices worldwide.