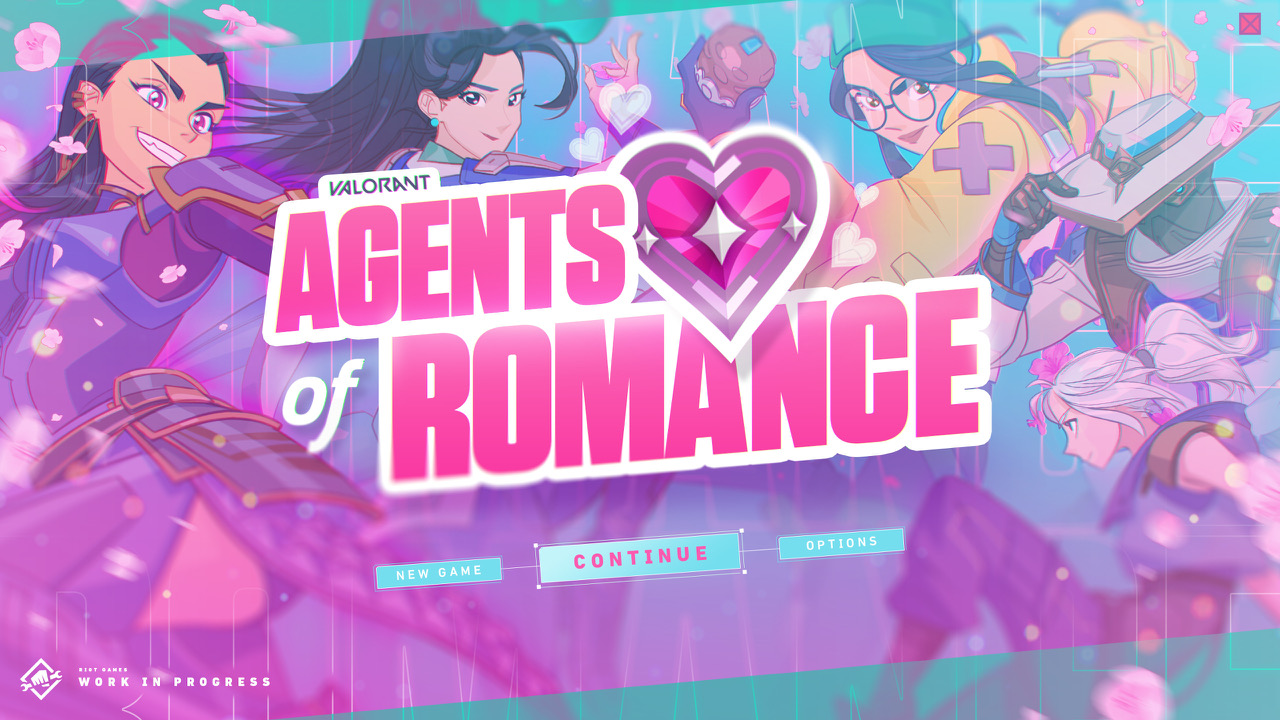 London, UK – April 1st, 2021 — VALORANT: Agents of Romance will be Riot Games’ first full game in the dating sim genre. This is following the success of League of Legends’ Spirit Blossom event, which featured dating sim components that delighted fans around the world.

The new title will allow players to take on the role of a new recruit as they train to be a VALORANT Agent. As players experience the rough and tumble life of an Agent in Training, they’ll build meaningful relationships with each of VALORANT’s Agents: collecting items, going on dates, and maybe even saving the world in the process.

“We’ve been looking into ways to expand and explore the VALORANT universe, even prior to launch, and when we landed on a dating sim, it just made sense,” said Anna Donlon, Executive Producer of VALORANT. “We believe that everyone can relate to and enjoy the Agents of VALORANT, whether they’re tac-shooter players or dating sim players.”

“Our Agents are living, breathing individuals that are as expressive as our players,” says Joe Killeen, Narrative Writer on both VALORANT and VALORANT: Agents of Romance. “Agents of Romance allows us to put those inner emotions and human connections front and center, and we can explore who these individuals are when the uniform is off and the guns are stored away.”

“It’s kind of funny. At first, we wanted to launch Agents of Romance as a game mode in VALORANT, but it started to take on a life of its own,” said Joe Ziegler, Game Director of VALORANT and VALORANT: Agents of Romance. “I don’t remember who suggested it, but at some point we just said, ‘Screw it. Let’s make this a whole game.’”

VALORANT: Agents of Romance is set to launch for PC in 2021.

VALORANT  is a competitive 5v5 character-based tactical shooter for the PC developed by Riot Games. VALORANT  is a precise and lethal multiplayer game with high-fidelity gunplay, a diverse arsenal of guns, agents with unique abilities, and competitively tuned maps for thousands of hours of play.

VALORANT  is a free-to-play game and optimized to perform on a wide variety of PC hardware, allowing for a global audience to compete. Demonstrated by the game’s best-in-class game server quality, globa infrastructure, and proprietary anti-cheat technology, Riot Games is committed to preserving the core tenets of the tactical shooter genre and upholding the competitive integrity of the gameplay experience.

Riot Games​ was founded in 2006 to develop, publish, and support the most player-focused games in the world. In 2009, Riot released its debut title, ​League of Legends​, to worldwide acclaim. ​League​ has gone on to be the most-played PC game in the world and a key driver of the explosive growth of esports.

As ​League​ enters its second decade, Riot continues to evolve the game while delivering new experiences to players with​Teamfight Tactics,​ ​​Legends of Runeterra​, ​VALORANT​, ​League of Legends: Wild Rift​, ​and multiple work-in-progress titles. Riot is also expanding the world of Runeterra through multimedia projects across music, comic books, board games, and the upcoming animated series ​Arcane​.

Founded by Brandon Beck and Marc Merrill, and led by CEO Nicolo Laurent, Riot is headquartered in Los Angeles, California, and has 3,000+ Rioters in 20+ offices worldwide.