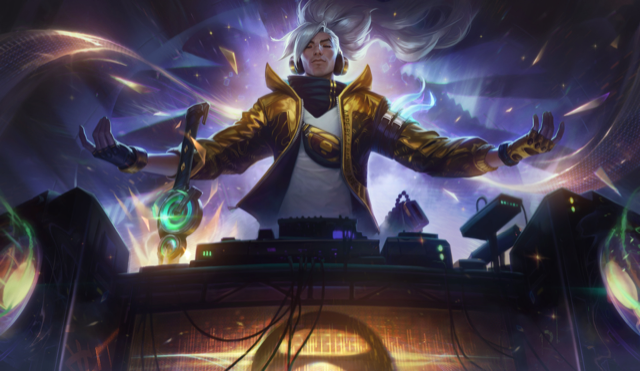 London, United Kingdom – September 1, 2020 – Riot Games and AAPE BY *A BATHING APE® announced today their collaboration on an apparel collection called AAPE BY *A BATHING APE® X LEAGUE OF LEGENDS collection, as well as an upcoming League of Legends Prestige Edition skin for True Damage Yasuo. The skin was revealed for the first time to players and fans today on the game’s Public Beta Environment.

AAPE BY *A BATHING APE® X LEAGUE OF LEGENDS is a unisex limited apparel collection, featuring an outerwear jacket, t-shirt, a pullover hoodie, a cargo pant, a pair of sneakers, and a hat, all available on AAPE.jp and in select stores globally. Additionally, an exclusive t-shirt of True Damage Yasuo Prestige Edition will be available globally on both the Riot Games’ merch website and as a part of the full collection. Details on the collection will be revealed on AAPE.jp on September 18, 2020.

“We’re honored to have been able to work with Riot Games on an in-game partnership, encapsulating our designs and aesthetic permanently into the game in the form of True Damage Yasuo Prestige Edition,” said an AAPE BY *A BATHING APE® representative. “We hope we did players justice with an authentic and sleek design that feels good to play and see in-game.”

True Damage Yasuo Prestige Edition will be available on September 25, 2020 to all players for the rest of 2020 for 100 in-game Prestige Points.

“We’re thrilled to have partnered with AAPE on this creative and resonant collaboration. From the skin to the individual pieces of clothing, every element of this partnership felt organic and we really think players will appreciate another way to express their fandom in the form of streetwear,” said Christian Bailey, Director of Consumer Products at Riot Games.

Follow this link to find some cool images of Yasuo dressed in AAPE clothing: https://prnordic.box.com/s/16no0bb6wjnweplczads6q9vqpapsj3t

Since its launch in 2009, League of Legends has become one of the most popular PC games in the world and a leader in esports. The best League of Legends teams from 12 regional leagues compete in a global tournament with an opening ceremony that merges entertainment, culture, gaming, sports, and more. Last year’s World Championship was viewed online by an esports record-breaking 21.8 million Average Minute Audience (AMA).

ABOUT AAPE BY *A BATHING APE®

At A BATHING APE®, creative concepts never cease to emerge. In spring-summer 2012, a brand-new diffusion line AAPE BY *A BATHING APE® (abbreviated as AAPE, reads A-A-P-E) was conceived to consolidate a young and hip message. With an eye to the young menswear market, AAPE aims at creating a simple, light and fashionable wardrobe for the new generation of fashionistas. With comfortable cut heavily trended in every season, each item at AAPE is designed to become an everyday staple. The AAPE logo, featuring prominently a graphic round face of the ape, is a younger version of the original A BATHING APE® Moon Face. Its monochromatic design is immediately recognizable thanks to its strikingly simple yet unmistakably powerful rendition, heralding a brand that is bound to become the most sought-after among young fashion-forward fans.

Riot Games was founded in 2006 to develop, publish, and support the most player-focused games in the world. In 2009, Riot released its debut title, League of Legends, to worldwide acclaim. League has gone on to be the most-played PC game in the world and a key driver of the explosive growth of esports. As League enters its second decade, Riot continues to evolve the game while delivering new experiences to players with Teamfight Tactics, Legends of Runeterra, VALORANT, League of Legends: Wild Rift, and multiple work-in-progress titles, while exploring the world of Runeterra through multimedia projects across music, comic books, TV, and more. Founded by Brandon Beck and Marc Merrill, Riot is headquartered in Los Angeles, California, and has 2,500+ Rioters in 20+ offices worldwide. Riot has been featured on numerous lists including Fortune’s “100 Best Companies to Work For,” “25 Best Companies to Work in Technology,” “100 Best Workplaces for Millennials,” and “50 Best Workplaces for Flexibility.