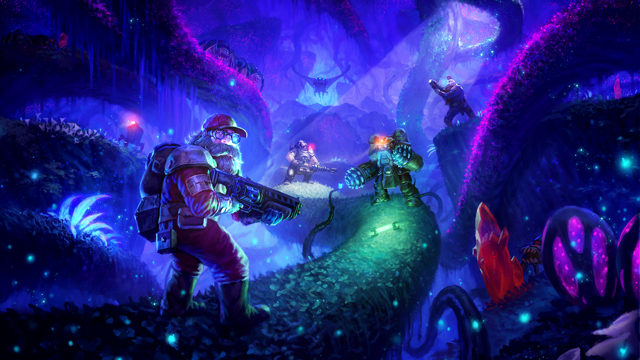 Beyond the new playable environments, missions and enemies, Update 33 also reveals two new dropsites for its crew of enterprising dwarves, alongside many new mission specs and Mactera to slay. In addition, the major update also includes everything from UI improvements, a streamer friendly jukebox, and many new dance moves to pop.

Azure Weald; they say ‘Kill or be killed’ is the mantra of this place. It is visually stunning, with dazzling, bioluminescent clusters of lichen lighting up the darkness, illuminating this fertile and overgrown region in flickering neon colors. In contrast, Hollow Bough is a much more dark, gloomy and organic affair, resembling the inside of hollow trees. Both biomes introduce new foes for miners to face and eliminate. Mactera Tri-Jaws and Mactera Brundle’s offer fresh new challenges for miners to take on in the Azure Weald, and they’ll need plenty of ammo! In the Hollow Bough, Deeptora Bough Wasps swarm in their hordes, and Stabber Vines lurk in the undergrowth ready to slaughter the unobservant. For imagery of both of these new biomes, and enemies, please find the assets here.

It’s ‘New Year, New Me’ for a bunch of the core missions in Deep Rock Galactic, with updates coming for the Elimination, Salvage and Point Extraction modes. Dwarves dropping in for Elimination tasks have double trouble on their hands, with two new Dreadnought variants emerging from Hoxxes IV. Miners will face off against the Dreadnought Hiveguard, and the monster twins: Dreadnought Arbalest and Lacerator. On Salvage tasks, you can now interact with a broken M.U.L.E. to download the locations of it’s missing legs to your terrain scanner to make objective location more streamlined. Refining the tech dropped in Update 32, miners are now able to connect fuel cells to drop pods with a simple fuel-line system. Finally, for Point Extraction missions, Update 33 introduces a brand spanking new model of the Minehead machine to fit in with other shiny new tech dropped in Update 32.

Streamers rejoice! For enterprising Dwarves and content creators alike, copyright strikes are to be avoided at all costs. 8 new “safe” tracks are now available to all players. Furthermore there are a bunch of new dance moves dropping in this update, so it’s time to kill the dancefloor! Other new features dropping in Update 33 are a new trade terminal UI, a new animation for Molly docking the Drop Pod. To thank fans for voting Deep Rock Galactic into the Better With Friends category in the Steam Awards, players will have access to a free new hat. Update 33 also launches alongside a new cosmetic DLC featuring a set of unique Dreadnought themed Armor for each class.

Ghost Ship Games is a Danish game development studio, founded in the spring of 2016 by a group of veteran game developers after years of working together. Ghost Ship Games’ motto is simple: Co-op First. The goal is to take co-operative gameplay to the next level and to make great games, focused on the core gamer. For more information about Ghost Ship Games, please visit: http://www.ghostship.dk

Coffee Stain is a game development studio, publisher and investor with offices in Skövde, Stockholm, and Gothenburg. Founded in 2010, Coffee Stain Studios is responsible for ridiculous global sensation Goat Simulator, the Sanctum Games, and the otherworldly factory builder Satisfactory, currently in Early Access. Coffee Stain Publishing was founded in 2017 to find talented developers and give them the tools and time to make their dream games. Since launch, the publishing arm has handpicked a select number of projects to partner with and in 2020 launched Deep Rock Galactic, which sold over a million copies in Early Access, and critically acclaimed retro action comedy arcade platformer Huntdown. In 2018 Coffee Stain launched Leveling the Playing Field (LTPF) to support gender equality in the games industry, which offers funding to smaller and start-up development teams where at least half of employees are women. In 2020, LTPF expanded by broadening its criteria to include underrepresented races and ethnicities. Read more at https://www.ltpfgroup.com/.

To find out more about partnerships and opportunities with Coffee Stain, visit: